Resilient and unrelenting Waldo Black doesn’t limit his creative expression to one genre. As a true story teller Waldo explores and creates vast and unique sounding music that engages his audience from all over the world. Whether it’s Hip-Hop, R&B, Funk, or Country Waldo Black prides himself on writing original music that all can enjoy! This nature for story telling began at the age of 11 where Waldo learned how to express the issues in his own life like depression, and anxiety through writing. While growing up in Harlem, New York City Waldo developed his ability to sing and would expand that skill when ultimately moving to Newark, Delaware. Waldo’s music speaks to the kids of tomorrow who refuse to be confined by the rules of society. Express & Be you No matter what is his mantra and Waldo’s committed to finding new ways to connect with people by continuing to tell engaging stories.

Beyond making music that crosses over many genres and displays many different influences, Waldo remains committed to finding new ways to connect with people and use his talents to help others. In 2014, Waldo Black’s passion for music and helping others allowed him the opportunity to work directly with the Be Positive Foundation, a Non-Profit Organization focused on spreading awareness, finding a cure, and improving the lives of individuals affected by pediatric Cancer. Waldo’s first of many performances was featured on 6ABC television and forged a new desire within him to fight “FOR THE KIDS”.

In 2018, Waldo took the fight to find a cure to new heights by coordinating an independent college “Positivity Tour” working with Four Diamonds Organization, the Be Positive Foundation, and the Children’s Miracle Network at the forefront. Each performance was at a college destination that focused on raising money and awareness for Pediatric Cancer. Now in 2021, Waldo is poised to release new music and continue uplifting and telling stories. 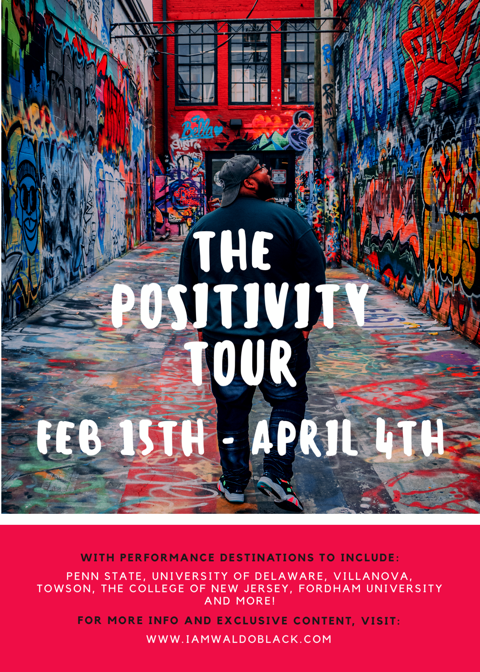